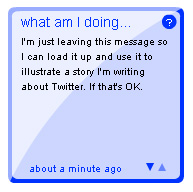 Some poor people have, while in the process of telling precisely zero readers what they had for breakfast, been sent messages from this fake account and then – here’s the stupid bit – clicked on the links supplied. Then they also clicked on “YES” to install whatever application appears, compounding their initial error.

So, anyway. Twitter users – be vigilant. If someone appears to be interested in reading about what colour socks you nearly put on this morning but then didn’t at the last minute because one of them was still a bit damp from the washing machine, it’s probably a scam. No one’s reading. Anything. Ever.