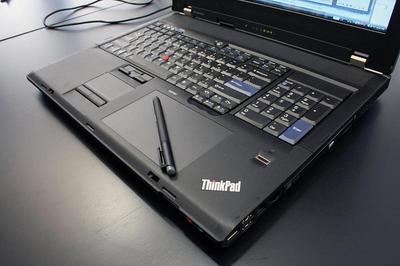 Laptops are generally known for portability – the idea being that you can sling it in your bag and carry it with you wherever you go. I wouldn’t try lugging about the Lenovo ThinkPad W700 too much though, as you might risk back problems. It’s massive.

Perhaps the main reason it is so gigantic is the built in Wacom tablet – which in the photo looks like a massive touchpad.

Size aside, it is also pretty heavy, weighing in at about 3.6kg – when is understandable when you see what’s inside. It certain isn’t hollow. It contains a 3GHz Core 2 Extreme quad core processor, 8GB of DDR RAM, two HDD bays, a 1GB Quadro FX 3700M graphics card, a 7-in-1 memory card reader, 5 USB ports – not to mention the “400 nit” brightness WUXGA screen, which is apparently “professional grade”. There will also be the option of a Blu-Ray drive.

Related Posts: A tiny Lenovo, for comparison | Or how about an ultra-thin Lenovo instead?

One thought on “Lenovo announces Thinkpad with built in Wacom tablet. It's huge.”