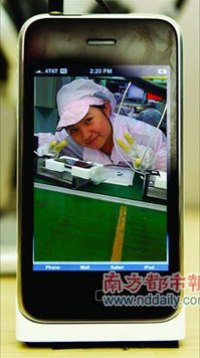 A month ago, she was a nobody, toiling in an iPhone factory in Shenzen in Southern China, but she’s rapidly becoming internet-famous thanks to a cheeky smile and v-sign to a co-worker on the production line.

The girl, who apparently works in the testing section of the plant, left photos on the device that weren’t deleted, but were discovered by macrumours.com forum user “Markm49uk”, who said that when he unboxed his new iPhone 3G, he found pictures of smiley girl on his home screen and in the photo album.

Other users of the forum were worried that the girl might be fired over the incident, but a Foxconn representative has confirmed that “She is definitely not fired”. They declined the name her, but if I know the internet, I’m sure it won’t be long before someone tracks her down. If you’re keen to keep up with all the latest on iPhone girl, then this site is for you: