Three radically different products, one post. I call that a challenge. Logitech have just unveiled a host of new products aimed at wildly different markets. They have just one thing in common. They’re all actually really useful, in their own ways. 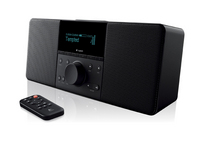 First up is the Squeezebox Boom. Now that’s a fantastic name. I’m sitting here saying it right now, and enjoying every moment of it. It’s a network music player, meaning that it’ll let you listen to your music collection from anywhere in the house. Just plug it into the power, give it your wireless network’s password, and you’re off.

It also supports internet radio, and services like Rhapsody, Last.FM, Slacker, Pandora and Sirius. Don’t worry about hooking up an amp and speakers – they’re built into the unit. It’s got a remote too, with a magnet on the bottom that you could stick to a cow.

The Squeezebox Boom will be available from the start of September, and it’ll cost you £199. Click through the jump for the Digital Video System and the Z-500 Notebook speaker. 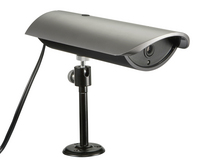 Next, the Digital Video System. For the security-conscious, or those who just like spying on people. Available in Europe for the first time, these cameras only take 15 minutes to set up, and have a range of paranoid features like motion-sensing email notifications and free remote viewing on any PC with an internet connection.

Cleverly, the cameras transmit video data over your electrical wiring, so there’s no need to run any extra cables. That video’s encrypted too, so any neighbors on the same ring circuit can’t monitor you. There are indoor and outdoor options for the Digital Video System, and it’ll cost you around £220 for two cameras (I think).

Extra cameras are £180 or so. Expensive, but can you put a price on peace of mind? Available in August, apparently – so in the next few days then.

Lastly, the Z-500 speakers, which we don’t have a picture of, unfortunately. Even more confusingly, there’s a Creative iPod dock already called the Z-500. More names like “Squeezebox Boom” would fix that problem. Sort it out, Logitech.

The Z-500 is a dinky little speaker which uses a wireless USB dongle to transmit data, so there are no wires connecting you to the thing. It’s designed to go along with your laptop, so it’s tiny and light, and the inbuilt rechargable battery should last 12 hours before needing to be juiced up again.

Related posts: Logitech Speed Force Wireless Racing Wheel for the Wii – ready for Need For Speed | Logitech V550 the clip on mouse that follows you everywhere you go