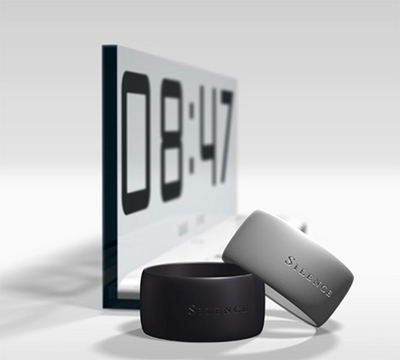 The Silent Alarm clock concept design has hit me right where it hurts – the bags under my eyes. I go to bed later than my girlfriend and she gets up earlier than me through a lengthly process of around five snoozes. I love being woken up every 10 minutes during my last hour of sleep. It means I get up so refreshed.

So rather than throttle my loved one, I’d like to get my hands on Johan Brengesjo’s brain child which wakes you up with wireless, soundless, vibrating rings for two. Sounds kinky and, who knows, maybe they could be but first I’d need to catch up on a bit of shut eye.

Naturally, the accompanying timepiece has two alarms you can set which can be snoozed with a shake of your ring hand. Each time you snooze it takes a little more shake to snooze some more, the idea being that eventually you shake yourself awake and out of bed or you dislocate your wrist. Tough call that one. There’s a lot of things I’d rather do than get out of bed.

Sadly, as with many of the best gadgets out there, it’s only a concept but here’s hoping someone eventually picks up on the idea and sends Johan a load of cash. Good luck Mr Brengesojo and if you want any guinea pigs for your prototype, then just give me a shout.

One thought on “Silent alarm clock – with this ring, I thee wake”