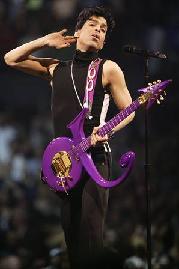 Prince, he who took on The Pirate Bay and YouTube last year, has once again waved his anti-piracy colours in the air, by ordering the take-down of videos on YouTube over the weekend of him singing ‘Creep’.

That’s ‘Creep’, made famous by Radiohead. Who still own the copyright of the hit song. Thom Yorke isn’t too bothered by Prince covering their song, describing it as “hilarious”, but is disappointed Prince’s record label NPG has taken the videos down, saying “surely we should block…well, tell him to unlock it. It’s our…song”.

Perhaps Prince was feeling a certain kinship with Radiohead, after both were deemed ineligible for a Brit Awards nomination due to their unorthodox album release last year.