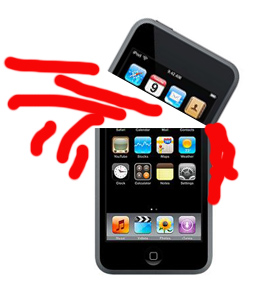 Someone was killed during Steve Jobs’s keynotes speech at the WWDC event today. Anyone remember the iPod Touch? He was the little fellow who looked just like an iPhone, but was available in an 8GB, 16GB and 32GB storage choice.

You could do almost everything on an iPod Touch that you could do on an iPhone, apart from that one important factor – that it lacked phone capabilities. Still, it was cheaper, with the 8GB option coming in at £199, whereas the 8GB iPhone was originally £269 before Apple chopped £100 off the price, less than two months ago.

Now however, who’d want an iPod Touch, considering Steve Jobs tonight said 8GB iPhones would cost $199, or £100 up front? Sure, there’s still the £30 or so that you have to pay each month for the contract, but most people pay that much for their mobile phone contracts anyway.

There is no reason to buy an iPod Touch anymore, unless you want the 32GB of storage in the £329 version. But then you’d prove yourself to be a royal idiot, when you could easily buy a £100 iPhone 3G, and spend an extra £159 on an 80GB iPod Classic. Or, you know, be happy with the 8GB of storage on your iPhone, and just update it with new music more often.

Goodbye, iPod Touch – it was nice knowing you, but you are no longer needed anymore.