Bored of your coffee table? Is its stained exterior and pitted surface embarrassing to you when friends or the social services come round? Then you should UPGRADE. You should GO DIGITAL with this, the quite astonishingly insane One & Co digital jukebox coffee table!

Here’s a picture of it. It’s clearly modelled on the Star Trek: The Next Generation bridge design, with its sleek curves and sturdy central column. “Play that awesome Johnny Cash album again, Ensign Crusher…” 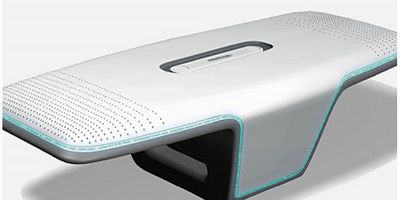 And that’s it. It is, when you think about it, a rather awesome idea. You spend your time in the lounge, so why not have a coffee table that stores and plays music files? Or why not have an iPod dock that does the same thing for a fraction of the amount of money this concept piece will inevitably cost if/when it gets made? So not such an awesome idea, then, really, when you think about it for a bit longer.

At least making it look like the Star Trek bridge is an awesome idea.