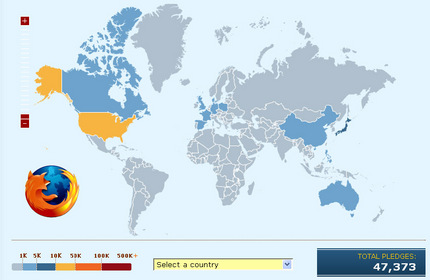 Everyone likes Firefox, apart from Microsoft and Apple, although it’s probably Steve Jobs’s guilty pleasure to sit naked on his Dell, surfing on Mozilla’s browser while listening to the Zune and whipping himself with a copy of Windows.

Now, I should imagine most of us have never been kind enough to donate anything to Mozilla for all their hard work but we’ll all probably download Firefox 3 soon enough, if you haven’t already bagged the beta.

Instead, why not give a little something back that won’t even cost you a penny by helping the company break the Guinness World Record for the most number of downloads in a 24-hour period?

All you have to do is go to the Download Day 2008 website and promise that you’ll be there on the day to click a few mouse buttons and do your bit to set the new record that is probably unofficially held by the likes of some World of Warcraft patch or expansion.

There’s an interactive map on the site to show exactly how the 47,373 pledges are spread out with America unsurprisingly in the lead with 10,793 and Spain doing remarkably well for its size with over 4,000.

A big thumbs down to Libya who’ve only mustered 4 and Russia with just 140 – both pathetic for their land masses. Even empty old Greenland managed 6 and tiny Lesotho 2. Burma’s an official disaster zone but 6 people have made the Mozilla promise and even war torn old Iraq has found 7 people to put down their guns for a while.

We’re not exactly doing fantastically ourselves with just 1,681, so let’s put on a good show for old Blighty. I’m willing to add my number. The only problem is Mozilla hasn’t actually announced the date for Download Day 2008. What if I’m indisposed? I wouldn’t want the Firefox police to come after me.

Related posts: Firefox 3 beta | Opinion: Firefox is my no.1 OS