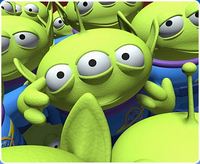 A Denver man is pushing city officials to create an Extraterrestrial Affairs Commission following the discovery of a video tape that he claims shows an authentic, living, breathing, all-American space thingy.

The footage, shot through an infra-red camera, allegedly shows “an extraterrestrial’s head popping up outside of a window at night, looking in the window”. The organism is believed to be around 4 feet tall and can be seen blinking.

Coincidentally, I suffer a similar problem with 4 foot tall, blinking monstrosity skulking around my back garden. People keep telling me it’s my niece though. I am confident that its fiendish alien creators will one day return from their far off galaxy and collect it, hopefully with the intention to clear up the mess it has made.

”As impressive as it is, it’s still one tiny portion in the context of a vast amount of peripheral evidence,” he added. ”It’s really the final visual confirmation of what you already know to be true having seen all the other evidence.”

Peckman also revealed that an instructor at the Colorado Film School in Denver has checked the video ”very carefully” and acknowledged that it is indeed authentic. There is absolutely no doubt in his mind that this is true, valid and accurate example of a genuine video tape. It most certainly is not a Blu-ray disc. He’s an expert, you know.

Of course, everyone else will want to see the video as well, now that these interplanetary prowlers have been caught in the act. Peckman isn’t opting to just dump it straight on to YouTube and have all the kids type ‘lollolololol aliens = epic phail’. First city officials and members of the press will be allowed to watch it at a closed session where no filming will be allowed, then later in a public meeting in Colorado Springs.

Eventually it’ll be made publically available. Then we can all question how an extra-terrestrial race, commanding the technology travel across the vast distances of space then opts to hop out and have a gawp through someone’s kitchen window.