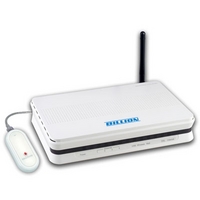 The idea behind Billion’s wireless router that works on ADSL and 3G is a good, and clever too, but I’m not sure why I want one?

The way it works is that you can plug your USB dongle (is that supposed to sound rude?) into this wireless router and create your own hot spot while you’re on the move or simply use it at home with your land line broadband service. Interesting.

Of course, the real advantage of Billion’s device is that you can dispense with wired-in home broadband altogether and just go with dongle-powered domestic WiFi instead. Now, that would be a saving. The only issue is that, currently, your dongle internet speed is much slower – around half, and that’s only if your 3G signal is good, which it invariably isn’t.

I like this device and the implications but it doesn’t quite seem right to me and I’ve a feeling they’ll be a better solution along before this kind of thing ever gets established – a bit of a MiniDisk, if you know what I mean.