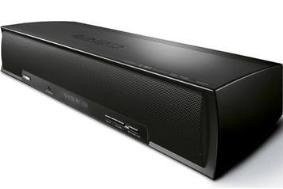 In terms of speakers, this £499 job from Yamaha will be suffice for the average person who owns a telly and a CD player, enthusiasts should probably look here, here and here instead.

Still, the YSP600 has a tidy amount of features, and can be hidden away under your TV, due to its small stature. With 1080p support and two HDMI-in sockets, your Blu-ray or HD-DVD player will love you. The integrated amplifier is pumping 62W throughout, with 15W in the two woofers, and 2W in each of the 16 beam drivers.

Going further inside, Dolby Digital and Pro Logic II are both supported – nothing wildly impressive there, but as farmer Hogget once said, “that’ll do pig, that’ll do.” Apparently there’s support for all you Panasonic Viera and Toshiba Regza owners, with control allowed on the TV’s remotes. Out in May, it’ll be £499.

Yamaha (via Stuff and Electric Pig)