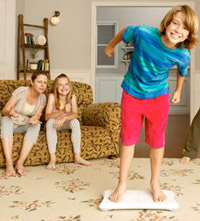 With Mario Kart Wii currently hogging the #1 spot in the games charts, it’s time for Nintendo to once again reach out to “The Others” – those gamers who are more interested in “fun” than getting a 100% rating and all the gold bananas on level 128.

Wii Fit is, frankly, one of those games that us traditional gamers laugh at. Is it even a game? Can standing on a plastic pad doing yoga moves really compete with Call of Duty 4? It sounds like the worst idea ever – but with Wii, the rules have been changed. Wii Fit’s sold 1.4million units in Japan over the last month. It’s huge.

We’ve already greatly enjoyed watching Susi flailing about on it – will the rest of the UK public be as accepting and happy to jump and stretch for entertainment? Will people pay £70 for the game and its required balance board? We’ll find out on Monday, when Wii Fit’s UK launch numbers arrive.

If it’s managed to out-sell “traditional” Mario Kart we may have to use the phrase “seismic shift” to describe the state of the gaming scene in 2008.