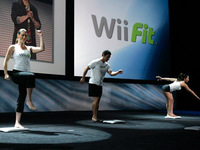 Good lord. We doubted it, we really did. We thought that the odd balancing/health/positive-thinking game would be a bit of a disaster, especially with its £70 price tag.

But no – Wii Fit managed to enter the UK charts at #1 this week, and it sold like crazy – handing it the sixth biggest-selling launch period of any game in the UK. Taking into account the £70 price point, Wii Fit actually became the third highest cash-taker of all time – taking £16.3m in the UK.

With Mario Kart Wii taking the #8 all-time UK chart spot just a few weeks back, we’re clearly only at the beginning of the history book rewriting period of Wii success. Imagine the amount of money Wii games will be hauling in next year.