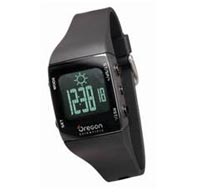 Oregon Scientific, with their firm grasp of the concept of the British summer, is releasing the world’s first weather watch next month.

There’s no information as to whether – no pun intended – the watch gets the forecast information from local meteorological centres or its own barometric device, but either way it should provide up-to-the-minute reports, as surely that’s where the benefit of this gadget lies.

That said, I’m not sure what use it is when you’re half way through a 10km hike? You either brought your coat or you didn’t and you’re still going to be sweaty or drenched, depending on your luck, with a smug little watch telling you that it was right all along.

Still, it tells the time and looks pretty good, so at a staggeringly cheap £39.99, I’m officially calling it a bargain. It’s a bargain.