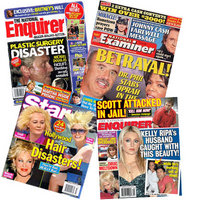 Last week’s Byron Report looked like it might have a calming influence on the ever increasing levels of sensationalism surrounding video games and help bring the public’s perception of games into a more accepting future. I know, I know – it’s appalling really. Thank god for British tabloid rags. They’re ready to step up and dredge every seedy gutter for a story or twenty that will make you lock your doors in terrified realisation that the outside world really is populated by roving bands of video game obsessed PSYCHOPATHS.

The following ad can be found on the ‘online talent community’ website StarNow.co.uk: “Did computer games make you turn to a life of crime? A national newspaper wants your story and will pay hundreds of pounds to the right person.” Applying is so simple too: “Write a few lines about how computer games turned you to crime and if it’s something we like, we’ll call you straight back.”

I’m not even remotely surprised that a National daily would stoop to encouraging a falsified account of the effect of video games on crime. I’m just utterly amazed that they would actually pay for it. Hundreds of pounds too. Hell, I want a go. It can’t be that hard…

As a child my parents weren’t at home very often. They used to fight and drink heavily and entertain a string of abusive partners. It didn’t matter though, I knew they loved me and that inside I was normal boy. But then I got my first video games console.

I started light at first – a bit of Donkey Kong here, some Zelda there – but within a couple of years I was on to the hard stuff. Nights flew past in a blur of Final Fantasy and Mario Kart. I developed a serious emotional attachment to Samus Aran.

As the evil of video games permeated through me, I became ever more distanced from reality. It was then that I discovered Duck Hunt. Perhaps it was the mocking grin of the dog that tipped me over the edge. But it was more likely the feeling of power I had as hundreds of digital water fowl perished before my expressionless face.

One day my head was buzzing for serious overexposure to flickering duck sprites, and it felt like no amount of rum and amphetamines could contain my passage to self destruction. Stumbling from the house I held up a local post office demanding that the terrified cashier empty the safe for me. Strung out as I was I could never have escaped that ordeal. It was just my last remaining shred of humanity that stopped me from turning the NES Zapper on myself right there in the shop.

I spent five years at Her Majesty’s convenience. Time enough for me to do some hard thinking and turn my life around. I think I’m a better man for it now, but I’ll never forget how the destructive power of video games nearly took away everything I knew and loved.

I expect the cheque is in the mail.