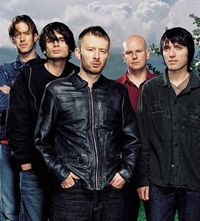 First they give you their music for free, now they let you play around with the songs as well. Yes, the publicity machine behind Radiohead has cranked it on up into overdrive once more for the release of the band’s new single, Nude.

The track has been split into five “stems” of vocals, drums, guitar, bass and strings/fx and hurled up onto iTunes where they can be downloaded for 99 cents each and remixed by the bedroom musicians of the world. You can then upload your own personal Nude to the Radiohead website where your opus can be voted on by members of the public. They’ve even made it possible for you to create voting widgets for your MySpace and Facebook pages, paragons of zeitgeist that they are.

Now, the cynic in me sees this not only as a way to drive sales of the single itself but a way to recoup some of the money that was not donated for the legally downloadable album, In Rainbows. The reason is because they haven’t actually announced what the prizes are. All they’ve said is that “Radiohead will listen to the best remixes” and then what? Steal them? Brush their teeth with them? Have a piece of toast and go down the pub?

I like Radiohead and respect all that the band do but you never can trust those pesky PR people. Voting ends 1st May, so get your skates on if you want to win the mystery prize and what the hell, stick your links on the end of this post if you want some extra votes.