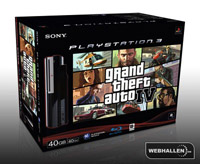 Is GTA IV the game that could shift PS3 out of its current sales and perceptual malaise? The little bundle pictured there appeared on European retailers yesterday, and could well help Sony get its PlayStation business back on track.

Sadly it’s only the 40GB model, and there’s an old-fashioned SIXAXIS in the box rather than a new DualShock3, but that’s just your standard example of how badly Sony got things with PS3. With a copy of GTA IV in the box, it could be the deal that kicks PS3 into gear. If any game can make buying an over-priced Blu-ray player with obsolete controllers seem like a good idea, it’s Grand Theft Auto IV. Shame a better version of GTA IV with more content is coming to Xbox 360, though.