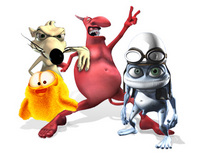 Orange is reporting a steady decline in demand for downloadable ringtones and wallpapers. It believes that powerful multimedia technologies in modern mobile phones mean users prefer full length track downloads and taking their own pictures with phone cameras.

With a bit of luck, it will only be a matter of weeks before those subscription ringtone services are filing for bankruptcy. At last, an end to late night ads encouraging you to text SHFT ME to 80264895 to get your free Usher ringtone as performed by deaf hobo on a broken keyboard.

Speaking of texting; while Orange reports that texting is up 21%, an international research group, TNS, reckons that texting itself will soon be replaced with instant messaging services like AIM and MSN messenger.

Orange isn’t that concerned though as the introduction of instant messaging on the Orange network clearly hasn’t impacted on texting levels. “What we are seeing is there is a greater usage of text messaging among the older groups,” Orange’s Matthew Kirk revealed. So, the baby-boomers have finally figured it out. I always feared this might happen. Let’s just hope they don’t discover Facebook or we’ll all have to up ship and find somewhere else to social network.

Err, anyway, Instant Messaging may be better because it’s a lot cheaper, but then there’s the problem of which one you use? AIM, MSN, Google Chat, Skype..? Unless someone cares to unify all of them in one neat package (or I suppose you could just alienate all your friends on outlandish IM programs), then I think I’d stick to texting as you won’t have to sign in to fifteen different programs to track someone down. Even then who’s to say you’re not leaving a message for them on their home computer or their Xbox or something.