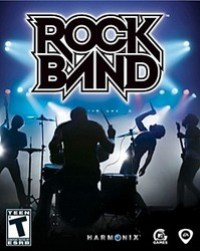 Just in case you weren’t wound up enough about Rock Band still not being released in the UK and having to pay more than our US counterparts when it is, MTV Games have announced that they will release downloadable albums especially for their hit title as of tomorrow.

Let’s face it though, you probably won’t be able to get them over here until 22nd April, 2113, and when you do they’ll cost £15 instead of the US$15 that the first album, Judas Priest’s “Screaming for Vengeance” is set to go on sale for.

If you’re not a big fan of the entire Priest epic, you can always buy individual tracks at US$2 a go and this seems to be what the standard rate will be for all further Rock Band album releases.

CEO of Rock Band developer Harmonix, Alex Rigopulos said: “We do want to release albums regularly at this point alongside the singles and multi-song packs. I will also say that over the course of this year, the amount of content we release will increase as well.”

The albums for download will be selected on the basis of gamers suggestions, record company offers and an internal wishlist. After “Vengeance” (tomorrow for Xbox 360, 24th April for PS3) “Cars” will be released next month and “Doolittle” by the Pixies in June.

The albums will be available for download via an in-game store but, so far, there are no plans to launch any brand new albums on Rock Band after the news last week that Motley Crue will release their single “Saints of Los Angeles” on the game.

More than 8 million tracks have been downloaded for Rock Band as of 15th April.