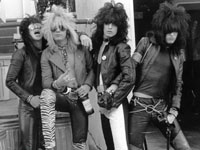 What is it with ageing rockers and cutting-edge music distribution schemes? Last month we revealed that Def Leppard was releasing a single via Guitar Hero III, now “The Crue” is releasing its new track exclusively via rival music game Rock Band.

Motley Crue’s single is called ‘Saints of Los Angeles’ and it’ll appear on the American Rock Band download list next Tuesday, for the equivalent of 99 cents – on both Xbox Live and Sony’s PlayStation Store. Because everyone in America has Rock Band. And we’re still waiting.

It’s a clever idea – the band seems all “edgy” and “in touch” with the youth by doing this, while the not-eligible-for-charts format glosses over the fact that were the single to be released in a traditional format it’d no doubt flop massively – and we certainly wouldn’t be raising awareness about the return of Motley Crue today.

Related posts: Kat gets ROCKED ON TAPE | Def Leppard do the same