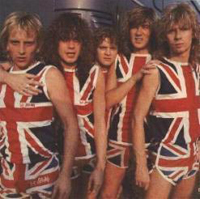 Rockers Def Leppard have confirmed at least three of their songs will featured on the next Guitar Hero.

In a recent US radio interview, guitarist Phil Collen revealed ‘Photograph’, ‘Animal’ and ‘Rock of Ages’ are likely to make an appearance in GH4, which has been penciled in for release at the end of 2008.

Sheffield’s finest will be joining another British band rumoured to be featured, relative unknowns ‘The Answer’, who had their track ‘Never Too Late’ picked up by Activision at a music trade fair earlier this year.

Related posts: First pic of the Nintendo DS Guitar Hero peripheral, plus video! | Beatles tracks might make it into their own version of Guitar Hero

One thought on “Def Leppard to make Guitar Hero debut?”