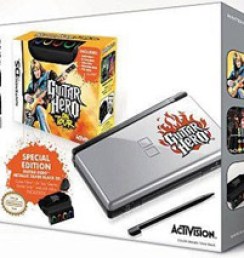 Last September, the design manager for Vicarious Visions, Adrian Earle, blabbed about Guitar Hero for the Nintendo DS having an exciting new peripheral, to rawk out to all the Bon Jovi tracks the game will no doubt contain.

Several months later, and we have an official photo of the peripheral, thanks to the German magazine N-Zone.de. Instead of holding the DS in the normal manner, it’s held sideways, like you would when playing Brain Training, allowing for the wraparound controller to be twiddled with your left hand. It’s interesting to note that it has just four notes instead of five, and that it comes bundled with a stylus in the shape of a guitar pick, for your crazy Joe Strummer moves. Video under the jump.

For more Nintendo-related news, check out our Shiny blog, WiiWii.