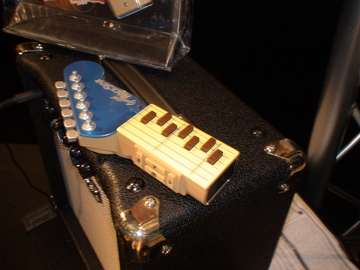 Kids getting jealous of you not letting them play Guitar Hero III or the Guitar Hero Air Guitar Rocker? I suggest you lock them in their bedrooms until March, when this Guitar Rockstar from Tomy is released, then let them run wild with the rockin’ riffs.

Spied at the London Toy Fair today by Toyology, it’s apparently got eight rock tracks pre-loaded which you can play along to, by strumming and playing riffs. Not too shabby for £15, and at least it’ll get the kids out of your hair for a bit.

Related posts
Style yourself ghetto-fabulous and abuse yourself crazy with Tomy’s Mock U Rapper toys
Sanyo and Tomy’s i-SOBOT is the smallest robot in the world
CES 2008: More footage of the ace Guitar Hero Air Guitar Rocker