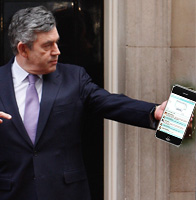 According to reports, the Prime Minister is on Twitter.

Unsure as to whether it’s actually him who’s logging those entries (which are mostly feeds from the 10 Downing Street website’s news feed), we’re quite impressed with the staid black background and ominous ’10’ Twitter logo. With 146 followers, they’re not actually following anyone themselves, not even the Dogg himself, Snoop Dogg.

Gordon Brown is likely to be the world’s first head of government to use Twitter. Which just begs the question, really – has Twitter jumped the shark, then?