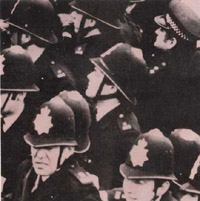 Good god, they’re actually going ahead with it.

Next week, says The Times, the government will introduce its Green Paper outlining plans to officially adopt a similar anti-piracy stance to the one used in France – get caught downloading copyrighted material three times and your internet connection will be terminated.

The Government’s Green Paper – which is a sort of initial outline of a planned future change in the law – says “We will move to legislate to require internet service providers to take action on illegal file-sharing.”

Some things are still to be decided – like if ISPs will be able to share data on banned users with each other. If that happens, you could be stuck net-free for LIFE. Or at least forced to exist like a common savage, stealing wi-fi in order to survive.

And who decided that three is the number of strikes you’re allowed, anyway? Maybe we could have five strikes as a compromise, or be allowed to buy additional strikes from iTunes for 79p?