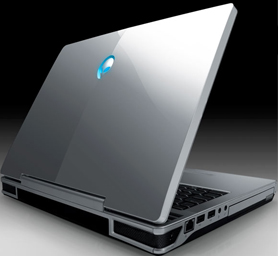 The m15x notebook from Alienware which we wrote about back in November has seen the light of day, just as hardened gamers were about to give up hopes on ever owning the high-powered machine.

The so called m15x has, as you’d expect, a 15″ display, and the Intel Core 2 Extreme X9000 processor as promised to us late last year, alongside the ‘world’s fastest’ NVIDIA GeForce 8800M GTX graphics card, 667MHz DDR2 memory, and their BinaryGFX system giving users the ability to chop and change between various graphics cards.

As with most high-end notebooks, you can choose the amount of storage you want (either 200GB, 300GB or a 64GB solid state drive), along with plenty of other specs, with prices starting from £1,543.