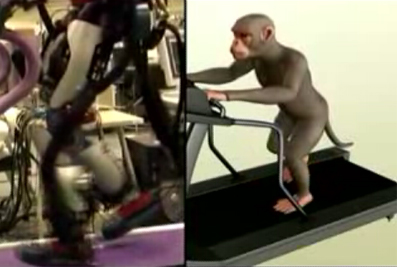 Time to pack up your clothes and head for the nearest bunker. Crazed scientists have taught a monkey how to control a robot on the other side of the world through brain-power alone, thus setting us on an inescapable path to a Simian/Robot alliance that will wipe humans off the face of the Earth. Probably.

Oh, alright, the Duke University researchers had no such nefariousness in mind. Instead, the experiment is about helping people with paralysis regain their ability to walk. “This is a breakthrough in our understanding of how the brain controls the movement of our legs, which is vital information needed to ultimately develop robotic prosthesis,” explains the team’s Miguel Nicolelis.

Look away now if you’re an animal rights activist – the experiment involved planting electrodes inside two rhesus monkeys’ brains, then making them walk on a treadmill. Sensors analysed the movement, then sent a signal to a robot in Japan. Even when the treadmill stopped, the monkey continued to make the robot walk, JUST BY THINKING.

Here’s a video of how it worked (with computer-simulated monkey replacing the real thing, possibly because electrode-implanted monkey heads don’t look too nice):

Now, let’s get the little fellas playing with a Pleo…