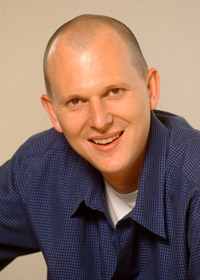 Actually, we can’t blame Phil for the disastrous PS3 hardware launch. That would be unfair.

As President of Sony Computer Entertainment Worldwide Studios, Phil was actually responsible for the disastrous lack of first-party Sony games. So blaming him for still having to play Resistance: Fall of Man is perfectly OK.

It’s also his fault that Home is so massively delayed, and it’s no doubt also his problem that there were no Sony-published PS3 games in the Japanese top 50 charts last week – rather bad news for a company that loses money selling the hardware then apparently makes it all back on the games.

Sony announced Phil’s departure today, with Japanese gaming super-boss Kaz Hirai saying that “As one of the founding members of SCE, Phil played a key role in the development and growth of the PlayStation business and our industry.” Which is rather kind of him.

It’s not much of a surprise that Phil’s off – only last week he slagged off his Japanese bosses by saying they were too slow in adopting the sort of casual games that have made Wii such a success. That can’t have gone down too well – was he perhaps booted out for this gaffe?

Current industry rumour has it that Phil’s now heading off to Atari, the troubled game maker that’s said it’s targeting the “casual” (mobile phone, web-based, for girls) gaming market. With a record that includes bringing smashes like Singstar and EyeToy to PlayStation2, Phil might just be able to make a name for himself at Atari – and possibly repair the damage the last couple of years of PS3 shame have caused to his reputation.

Related posts
“Psx4all” PlayStation emulator for iPhone and iPod Touch on the way
Sony’s PlayStation Store for PSP launches – is UMD finally on the way out?
2007 in Review No. 8: Wii beats PS3 and Xbox 360