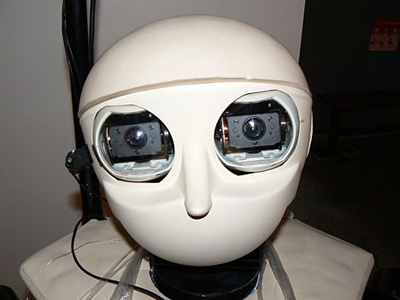 And you know that the only reason for robots to monitor crowds is so they can decide WHO NEEDS TO BE ELIMINATED FIRST IN ORDER TO SUBJUGATE HUMANITY. I know how these things work.

But if you’re not quite as tinfoil-paranoid, you might think that Robovie is pretty cool. He’s been developed by the Advanced Telecommunications Research Institute (ATR) in Japan, with the much more benign aim of spotting people who are lost, and giving them directions to their destination.

He uses 16 cameras, six laser-range finders (eek!) and nine RFID tag readers to watch up to 20 people at a time, analysing their behaviour to see if they’re acting disorientated. Clearly, he might struggle if placed in a UK high-street at closing time, faced with hundreds of “disorientated” British binge-drinkers.

Anyway, Robovie could be working the shopping malls of Osaka by the middle of this year, so if you’re going, watch out for him. And his lasers.