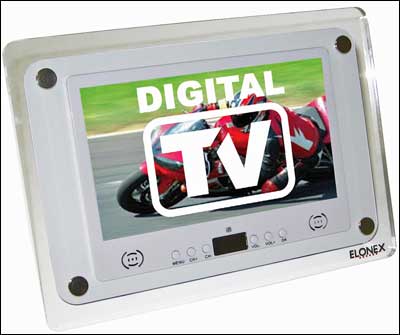 Well, with so many on sale now, ranging from the £50 cheap to the £200 expensive, they have – in recent months – become best-sellers on many high streets. In fact, recent sales figures show more than a MILLION of them were sold last year.

The average cost of a 10in one dropped by £23 in the last six months and experts reckon TWO MILLION will be shifted in 2008.

And it’s little wonder when they are being combined with a whole host of other tech like the Elonex Digital TV Picture Frame (above) that offers a load of telly channels on the screen through a digital tuner (DVB-T) – all for £99.

Many now have calendars, and clocks, and this makes them far better value than the early ones that just had enough memory for a couple of dozen snaps that purely revolved in a boring slideshow.

Other reasonable priced models allow music to be set to the slides, and not only that – Parrot has even produced one that accepts pictures sent to it by text message.

This is serious cool stuff and within three years, I reckon they’ll be a digital frame in the majority of homes across Britain as the prices tumble further.

Sony have obviously realised this, hence their delayed entry to the market but the likes of Kodak and Philips knew the potential and got in early.

They’re even making waves by becoming infected with computer viruses, like the frame made by Best Buy in America that caught a bug, which is worrying when they are hooked up to your PC or connected to a USB stick.

And we are starting to see them on keyrings too. In fact, we could be in danger of digital picture frames becoming a bit over-exposed (geddit!).

Seriously though, with so many digital images in homes around the world, just sitting on hard-drives and never seeing the light of day, these are the answer.

How often do you actually print all those photos you take, instead leaving them resting on the memory of your PC devoid of an audience. Now, they’ll always be on show, unobtrusively sitting there on the shelves or the wall of your living room, bedroom or kitchen and make your memories come alive.

Who needs boring paper, plastic pockets and glue when you can have glass, megabytes, moving images and even MPEG-4 video – there really is no competition.

We might still be 11 months away from Christmas, but don’t be surprised if you end up with one of these in your stocking come December 25.

Now Sony are on board, expect the world and their wife to jump on the digital frame bandwagon in a bid to produce the flashest and most picture perfect gadget of the lot in a bid to keep us consumers snap happy!