NVIDIA has a big stand at Mobile World Congress, including a concept handset showing off a user-interface powered by the company’s new APX 2500 mobile CPU And I’m not getting over-excited when I say it looks awesome. Scrolling, zooming, transparent overlays, the works. Check the demo running on a big screen:

Don’t worry, I’ve got a video of it actually running on the handset too, in a minute. NVIDIA whacked the handset together in a matter of weeks for this show, to unveil the new mobile CPU.

The UI is designed to show what’ll be capable with the next generation of mobile handsets. “What this shows is the iPhone didn’t go far enough,” says NVIDIA’s Oscar Clark.

Here’s a video of it running on the handset itself:

But it’s not just about the UI. The concept phone is also hooked up to a big plasma screen outputting full HD video (720p H.264). NVIDIA is keen to stress the efficient power management of the APX 2500 too:

“Not including the screen, just the power of the chip, you can run 10 hours of HD,” says Clark. “The reason we don’t include the screen is you don’t know the variables involved in the connector and the screen. I could hazard a guess, but I’d get in trouble…”

Here’s a shot of the phone (at the bottom of the pic) outputting HD video to the big plasma screen: 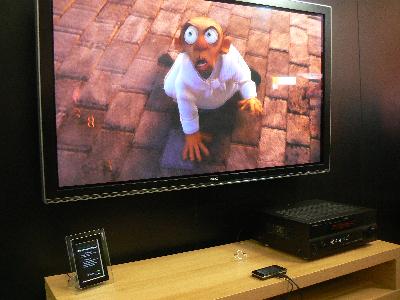 Watch those videos again. Cor, eh? Roll on this kind of stuff appearing in handsets we can buy…