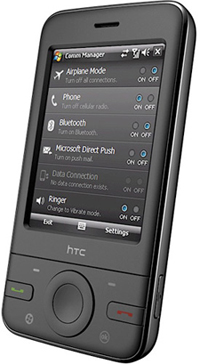 Would you believe that HTC has signed up TomTom, and packed their Navigator 6 GPS system into the P3470, announced today at MWC?

Sadly it’s only got EDGE support, but this is because it’s ‘affordable’, a fairly entry-level handset which isn’t really reflected with an entry-level price: this baby is €449.

Still, the lightweight candybar features a large (2.8″) QVGA touchscreen (similar to the Touch), and meagre 2-megapixel sensor in the camera, albeit with macro focus. An internal memory of 256MB (expandable with a microSD card), 128MB in RAM, a 200MHz CPU and Bluetooth, it’ll be available in Europe late February, exclusive to Orange within the United Kingdom.