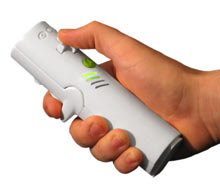 If the Xbox 360 and Wii ever had a baby, this is what would pop from the Wii’s loins – the Motus Darwin controller for non-Ninty consoles. Yup, including the PC.

With motion-based technology, it gives those who can’t manage to track down a Wii the chance to control games by waving it in the air just like a Wii-mote. Originally designed to compliment a Motus game, iClub, it can analyse the user’s form and stance, thus helping them onto the way to becoming The Next Tiger Woods.

Unlike the Wii-mote, which connects to the console via an infrared sensor, the Motus Darwin actually employs the use of gyroscopes and accelerometers to determine the position of the controller to the actual earth. Have I lost you yet…?

The Motus Darwin is the first product of its kind apparently to use this technology, as other companies weren’t able to get the process down pat. Motus however, has designed a seemingly flawless technology with software, firmware and hardware which all aims on correcting the problems normally faced when using gyroscopes and accelerometers. When it launches, it will retail for around $99.