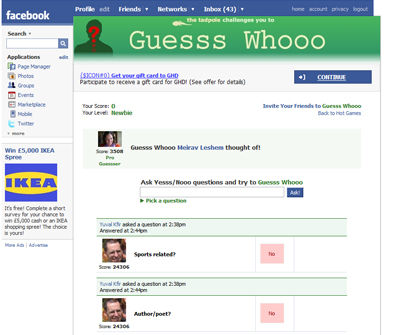 Having torn myself away from Gridrunner++ on Facebook, here’s another game that takes less of a retro spin. It’s called Guesss Whooo, but no, it’s not a clone of the famous board game.

Instead, it’s like a celeb-focused version of 21 Questions – you think of a celeb, then your friends and other Guesss Whooo players have to ask questions to figure out who it is. You’re only allowed to answer Yes or No to their questions, of course.

Developer Amiel Shapiro sent it to me, and reckons it’s a game that appeals to non-gamers. “It’s also a very convenient way for non-bloggers to generate content,” he says. “Due to the rather limited structure, people feel comfortable to ask, answer, write comments and actually have small discussions during the game.”

It’s a cool idea, although with many of the current players based in Israel, I’m floundering a bit on the celebrities they’re choosing. Still, as the game picks up an audience in other countries, that won’t be an issue any more.