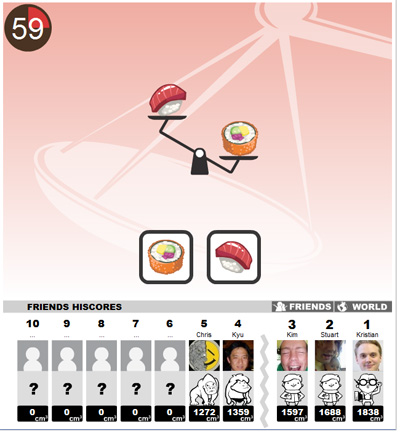 You can shove your Dr. Kawashima where the sun don’t shine – the hot new thing is connected brain training on Facebook. At least, that’s what I reckon after playing Who Has The Biggest Brain?, a new Facebook app that tests your grey cells against those of your friends.

It follows the format of existing brain trainers, with four rounds covering memory, mathematical skills, visual perception and analytical ability. At the end, your scores are blended to give you an overall rating for the size of your brain – which you can then compare to your Facebook mates. It’s the work of Playfish, a new company with $3 million funding behind it to create “social games”.

The competitive element is fearsomely addictive, and the Flash graphics are polished and attractive. More importantly, my brain is a whopping* 1688 cm in size, which makes me smarter than you. At least, until you’ve played the game and overtaken me, obviously. Check it out via the link below (you might need the latest version of Flash though).

Who Has The Biggest Brain?