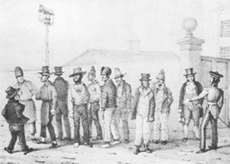 Australia has found inspiration in their rich history, where Britain sent convicts over to the Southern land in the late eighteenth and nineteenth centuries, and asked the motherland just what to do with those naughty filesharers.

Yes, even people in Australia are downloading music and movies illegally, and they want to take action against these ‘criminals’ and force ISPs to abandon their customers who’re found downloading copyrighted material. Last year 2.8 million Australians downloaded over a billion songs illegally, and whilst that’s just a small percentage of the amount downloaded in the UK, it’s enough for the government to instigate the ‘three strikes policy’.

Currently they have “stiff enough” penalties in place, according to the National Internet Industry Association chief executive Peter Corones, who claims that offenders can be fined up to $60,500 and companies up to $302,500 per infringement, and up to five years in jail. Stocks and leg irons are reportedly not being considered.