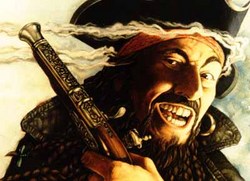 Got a letter from the government the other day. Opened it and read it, it said they were… mightily displeased that I was running an internationally renowned BitTorrent site. Is what Chuck D would say if he was rewriting Black Steel to cover today’s news about The Pirate Bay. *puts down shoehorn*

Yes, a Swedish public prosecutor has filed charges against The Pirate Bay for allegedly preparing and participating in copyright infringement. It’s the most serious challenge yet for the company, which was a flagship for file-sharers even before its offices were raided by the police in 2006. Now the site’s founders Carl Lundstrom, Peter Sunde, Frederik Neij and Gottfrid Svartholm Warg have all had the charges filed against them.

As you might guess, the music industry is pretty happy about the news. “The Pirate Bay has managed to make Sweden, normally the most law abiding of EU countries, look like a piracy haven with intellectual property laws on a par with Russia,” says John Kennedy, boss of music industry trade body the IFPI, which claims The Pirate Bay is making pots of cash from advertising on its site.

“We welcome the filing of these charges in Sweden. The evidence presented by the prosecutor shows that The Pirate Bay, which claims to be motivated by idealism, is really motivated by making money.”

However, the site’s owners have responded on their blog: “In case we lose the pending trial (yeah right) there will still not be any changes to the site. The Pirate Bay will keep operating just as always. We’ve been here for years and we will be here many more.”

In the same post, they also claim that The Pirate Bay is now tracking over one million torrents, and has 2.5 million registered (and active) users. Watch this one run and run…