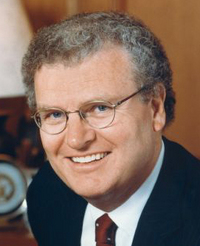 Speaking at Sony’s main press conference in Las Vegas today, Sony boss Sir Howard Stringer wasn’t going to let the recent news that Hollywood goliath Warner Bros. turning to Blu-ray exclusively. “All of us at Sony are feeling Blu today” said Stinger, then thanking Warner for making their decision “in the long-term interests of the consumer”.

Apparently, even in the cut throat world of a format war it’s rude to kick an enemy while it’s down so Sir Howard remained quietly satisfied, concluding his thoughts on the topic with “I’m sure you want me to say more… but I won’t”.