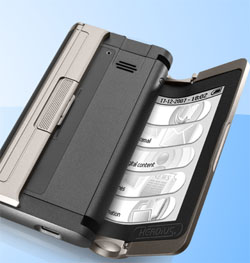 It’s almost a year since we caught sight of Readius, which maker Polymer Vision described at the time as an “information companion with rollable display”. It was a connected device with an e-paper screen that rolled up around the main body when not in use. Well, it’s apparently in production now, but there’ve been a few changes.

So, Readius is now apparently a mobile phone – an HSDPA handset with a five-inch greyscale e-paper display, and 30 hours battery life. The downside, obviously, is that you can’t watch video or play games on it. However, Polymer vision hopes its suite of services – including e-books, RSS feeds and email – will make up for that.

The company said today that Readius is due to go on sale in mid-2008, although there’s no pricing details yet. I’ll be on show at the Mobile World Congress show next month in Barcelona, so we’ll try to get more info then.