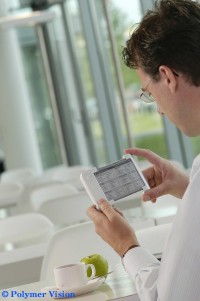 One of the gadgets causing a stir at this year’s 3GSM is the Readius, which maker Polymer Vision describes as an “information companion with rollable display”. The screen basically rolls up around the device when not in use, giving you a five-inch display, in a device that’s the size of a small mobile phone.

The company is showing off its first prototype version at 3GSM, with the final product due to launch late this year or early next. One of the key uses is to read e-books, although its 3G connectivity means you’ll also be able to check emails, read RSS feeds, and access other documents and text-based services. Oh, and you can play MP3s and podcasts on it too.

“We say this is the iPod of information,” says CTO Edzer Huitema; clearly a man with an eye for a snappy soundbite.

“It uses electronic ink and an active matrix below, which is why it is thin enough to be rolled. Making LCD rollable is really challenging, so we had to find another way! Also, the screen is whiter than an LCD display, and looks much better in direct sunlight.”

Pricing details have yet to be announced, but apparently Readius will cost around the same as a high-end smartphone, and will be sold by mobile operators or “other third parties”. It’ll be down to the operators to supply content for it, such as e-books.

But the interesting part came when I asked Huitema whether this kind of rollable screen could be used in other devices in the future.

“The potential is to have a rollable display in every mobile device,” he says. “It solves the problem of consumers wanting to have small devices, yet big displays to make use of the 3G data connection.”

But hang on a second. One of the big selling points of 3G and multimedia handsets is stuff like photos, video and gaming. Right now, Readius can’t handle any of those, due to being monochrome and comparatively slow to refresh the screen (as in for video and games – it’s perfectly fine for reading e-books).

“We are developing faster versions of this display that are larger and higher resolution,” says Huitema. “We’re also busy adding colour to it. I would say we’ll go slowly towards that in the coming years. Colour and video is still about five years away.”

In other words, don’t hold your breath for every phone to come with a wraparound screen. For the moment, Readius looks more likely to challenge standalone e-book readers, albeit with a price that may be too high initially for all but the earliest adopters.