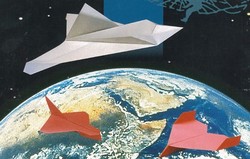 With the Cold War a distant memory, what are space researchers to do to fill their time? Make paper planes, that’s what. At least, this is what researchers at the University of Tokyo are doing, in partnership with – who else? – the Japan Origami Airplane Association. Obviously, this is paper planes that can fly in Space.

Apparently, they’re working on an 8cm prototype and testing it tomorrow in an “ultra-high-speed wind tunnel” at the university’s Okashiwa campus. It’ll have to stand up to Mach 7 wind speeds to stand a chance of making it through the Earth’s atmosphere, apparently. That’s 5,300mph!

I think they missed a trick though. They should have opened this up to all-comers: a competition to design the first space-worthy paper plane. I bet there are plenty of amateur plane-makers out there who’d fancy a crack at it.

There is, of course, the chance that this story is a Japanese spoof to bait Western tech bloggers, but I’m keeping my fingers crossed that it isn’t…

Related posts
Tokyo Flash is back from outer space with the Oberon
Vinton Cerf, founding father of the internet, wants to send his baby into space
Spaceport America – Virgin Galactic’s hangar and terminal really will exist