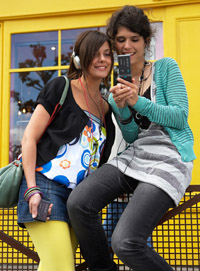 And it’s thanks to the hottest and coolest new “thing” in the music world – paid for subscriptions, says telecoms analyst Juniper Research.

Mobile-friendly services like Universal’s Total Music, where you pay a set fee every month and get to listen to EVERY record it’s produced/churned out, will fuel this cash-mad boom, with iTunes obviously mopping up the rest of everyone’s money.

But mobiles and subscription plans will soon CRUSH iTunes, with all-you-can-hear subscriptions set to rake in more money than paid-for individual purchases by 2012.

Dr Windsor Holden, author of the report which makes all these bold, futuristic claims, says “Music rental services such as those offered by Omnifone are incredibly ‘sticky’, in that once consumers have taken the time and effort to build up an extensive playlist, they will be increasingly reluctant to unsubscribe from that service and from the operator, thereby providing a significant boost to ARPU levels.”

And he’s damn right – they’re amazing money-making schemes. The number of companies taking £4.99 a month out of my account because I simply can’t be bothered to work out how to tell them to stop is huge.

And proper downloads of individual tracks and albums are set to rocket as well, as 3G services roll out to “emerging markets” and all the poorer people of the world get to enjoy the novelty of actually paying for MP3s. So if you want in on it, head to India – Dr Holden reckons the number of music downloads in the sub-continent alone will rise from 2007’s figure of two million to a staggering 480 million-odd by 2012.

If you’re in digital music distribution in 2012, you’ll be minted, basically.

Related posts
Universal Music Group takes on iTunes with Total Music subscription service
*Yawn* The Who launches paid-for subscription site with access to whole back catalogue
Oh, and Kylie Minogue is giving away free music too