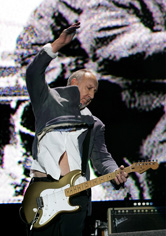 There’s certainly something in the Hollywood drinking water of late, with musical acts from Nine Inch Nails to Kylie Minogue taking their assaults on our eardrums online. The most recent band to get in on the act is The Who, who have announced they’re launching a new subscription site, aptly TheWho.com. How novel!

It’s been in beta for a few months now, but on the 5th of November, it’ll officially launch, with baby-boomers asked to cough up $50 a year to become a ‘Wholigan’ to get their mitts on ‘exclusive’ goodies.

It’s a huge ask of dedicated fans, as they’ll be receiving pretty much the same stuff they received for free previously, such as blogs, message boards and gig info. Sadly 25% off merchandise, advanced ticket info, and a free 2-CD boxset, View From A Backstage probably won’t be enough to tempt every Who fan residing in the depths of society (ok, your Dad’s office) to join up.

One semi-attractive feature of the site is the chance to grab yourself a personalised email address, such as [email protected], and from 2008, Wholigans can download every song in their back catalogue through the site, and watch all their music videos online.

Charging such a huge amount for services diehard fans can get for next to nothing through Napster or Rhapsody seems absurd, but when you consider they no doubt have all the Who albums anyway, it makes the charge all the more unattractive. I’d imagine the band will be marketing the unlimited access to their back catalogue as the biggest draw to the site, but the demographic they’re aiming for won’t be that impressed, particularly when they’re bound to be available in sub-standard bitrates anyway.

Needless to say, it’ll be mighty interesting to see how fans react to TheWho.com, and whether they can convince users to pay for that second annual fee.

Related posts
Nudge nudge, The Who’s retro fruit machine is on eBay
Oh, and Kylie Minogue is giving away free music too
Trent Reznor gets even more riled up with music industry, vows to do a Radiohead