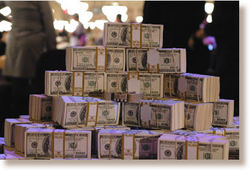 UK digital music store 7digital has announced that it’s raised £4.25 million from VC firms, as part of its efforts to continue developing its service and expand to new countries, such as the US.

The store currently has more than 3.5 million tracks in its catalogue, and more than 1.1 million customers. It says it’s seen a sales surge of 188% since starting to sell DRM-free music last year. It also runs digital music services for the likes of Bebo, Last.fm, ITV and, er, Pringles.

A few days ago, fellow UK digital music firm We7, which focuses on ad-funded downloads, raised £3 million of its own VC funding to help it grow beyond its current 500,000-track catalogue and 90,000 users. As other ad-funded music firms struggle, We7’s organic growth is well worth a spot of patriotic celebration.