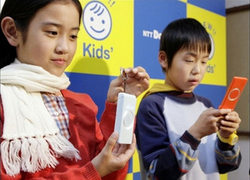 A survey by the Japanese government apparently indicates that kids there are addicted to their mobile phones. I can’t help wondering if that conclusion depends on how you define ‘addiction’ though – it’s a pretty strong word, after all.

So, according to the survey, 96% of high-school students in Japan have their own mobiles, with girls spending more than two hours a day using them, and boys spending over 90 minutes. Popular activities include reading e-books, sending emails, and listening to music. Meanwhile, students who send more than 20 mails a day from their phone are twice as likely to be unhappy at home.

Does this show genuine addiction? It seems to me like the first couple of stats simply show how intrinsic mobile phones are to these kids’ daily lives – they’re communicating with friends and entertaining themselves. I’m not denying that mobiles can have addictive qualities for some people – but this survey doesn’t seem to prove it.