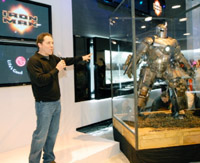 Iron Man and his female love interest will send each other important text messages using LG mobile phones in the forthcoming blockbuster, after LG revealed it’s done the deal to fill the movie with its products.

Robert Downey Jr.’s Iron Man and Gywneth Paltrow’s Pepper will each use an LG model – with the VX9400 TV phone and the company’s KS20 Windows Mobile smartphone getting the nod.

Iron Man gets the VX9400, in case you were wondering. It is presumably deemed more “macho” because of its bulky rotating screen.

Having just re-watched the two-hour Sony advert that was Casino Royale, I’m particularly keen to see how LG and Marvel/Paramount manage to incorporate LG’s phones into the superhero movie.

I’m guessing it will be “unsubtly” and “badly.”