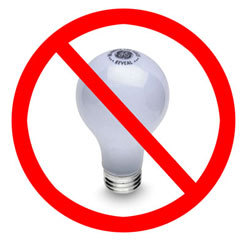 Many of us are moving over to energy-saving bulbs these days, but there’s no legal requirement to do so. Although that will be the case very soon in Ireland.

The government has announced plans to ban the sale of incandescent light-bulbs by the year 2009 – the first European country to make such a move. According to John Gormley, the Minister for the Department of the Environment: “The aim of such a move will be to end the use of incandescent light bulbs in Ireland. These bulbs use technology invented during the age of the steam engine. By getting rid of these bulbs we will save 700,000 tons of carbon dioxide emissions every year. It has been estimated that consumers will save €185 million in electricity costs every year as a result of the measure.”

Sounds reasonable. All old incandescent light bulbs will be phased out of the Irish market starting in January 2009.