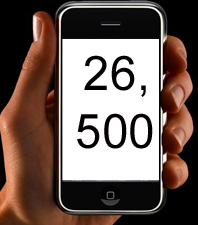 O2 and Apple are still being tight-lipped about the number of iPhone sales in the UK, but even more so, about how many activations they’ve had on the network.

Good thing The Register is here to blab to the internets however, about the gossip they wangled from ‘reliable channel sources’, that O2 has activated just 26,500 of the iBricks since it launched two weeks ago.

Either most people are unlocking them, to work with other networks, or that’s a measly amount of iPhones sold – well below the reported 70,000 sold on the first weekend, which The Mirror first stated. Adding to Apple’s grief is that retailer Carphone Warehouse sold just 11,000 of the 50,000 units they had in stock for the launch weekend, according to the same sources.

Now, this is all just hearsay, and we haven’t heard any official figures in regards to units sold and phones activated, and perhaps thousands of iPhones have been bought, but not activated yet, as they’re lying under someone’s bed right now waiting to be given for a Christmas present.

However, surveys have suggested the iPhone is far too expensive for the general British public. Added to that, our previous Tech Digest poll shows 36% of iPhone owners unlocked theirs on the first day, and 42% of readers said they plan on unlocking when they actually splash the cash on one, so maybe, just maybe, the rumours are bang-on about the lack of sales and activations, this time.

For more iPhone-related news, check out our Shiny blog, iPhonic

Related posts
The iPhone sold 70,000 units across the UK in first weekend, claims The Mirror
iPhone too expensive for British consumers says survey
Poll: Bought the iPhone? Have you unlocked it, or just succumbed to O2’s network?