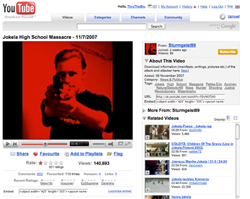 My heart sank when I saw the front page of The Times yesterday. The lead story was the dreadful high-school shootings in Jokela, Finland, and the headline was ‘THE YOUTUBE KILLER’. The games industry can breathe a sigh of relief: it seems Google’s video-sharing site is the new Root Of All Evil in the eyes of Fleet Street.

To recap: A Finnish student went on the rampage in Jokela, seemingly after spending several days outlining his plans in a series of videos on YouTube, with the last titled simply ‘Jokela High School Massacre’.

Meanwhile, on a less fatal but equally repulsive note, a British man was recently in court accused of urinating on a dying woman in the street, while filming it on his cameraphone and shouting “This is YouTube material!”.

And what’s more, if you believe media reports, thousands of British schoolkids are happy slapping people, and posting video footage on YouTube to humiliate the victims. X-Factor contestant Emily was booted off the TV talent show after her starring role in just such a vid was revealed.

It’s all YouTube’s fault! Can’t someone ban it? If those corrupting Googly bastards aren’t stopped from forcing our kids into violence, humanity is doomed…

Okay, no. YouTube isn’t to blame for any of the above incidents, and any attempts to make it the convenient scapegoat will be short-sighted at best. Yet there ARE issues to be dealt with around antisocial behaviour and Web 2.0, particularly in the Jokela case.

Such as: are parents monitoring their kids’ use of YouTube, MySpace and the rest, and if so, when do they cross the line from responsible parenting into control-freak Big Brotherness? What policies does YouTube have in place to spot potential high-school killers, given the fact that there will inevitably be copycat cases in the coming years?

Is it even their job to police this stuff, or should YouTube users be relied on more to report suspicious content (I can’t fight off the ‘what if’ thought about someone spotting Sturmgeist89’s last video and somehow alerting the school authorities in between him leaving his computer and arriving at the school).

Web 2.0 is so central to the lives of so many Western kids nowadays, that whenever a terrible tragedy like Jokela (or Columbine, or any other high-school shooting) happens, they probably will have a MySpace profile, a YouTube account and other digital identities. If someone is disturbed enough to shoot their fellow pupils and/or teachers, chances are there’s some indication on these sites, or their personal blogs. The question is how these signs can be spotted – without infringing the civil rights of youngsters who aren’t ever going to go postal?

These are big, thorny questions that labelling someone a YOUTUBE KILLER simply isn’t going to solve. It’s not just kids, either. Currently, there’s a case in the news about a murder, and one of the suspects has her own MySpace profile, where a sunny blog post put up weeks before the tragedy has been invaded by commenters shouting ‘MURDERER’.

There’s a ghoulish fascination with the profiles and blogs of people who may or may not have been involved in a dreadful crime, even when it hasn’t yet been proven – what shocked me was the willingness of those MySpace commenters to have their mugshot and profile link next to their accusations, which could make an interesting set of libel cases if the suspect in question is cleared.

There are so many positive things about the ready access to self-publishing enjoyed by kids and adults alike nowadays, whether it’s blogs, social networks or video and photo sharing sites. The fact that some people use these services and also commit terrible crimes isn’t something that should be ignored, but neither should it spur kneejerk reactions against the technology itself.

One thought on “Opinion: YouTube isn’t turning kids into killers”